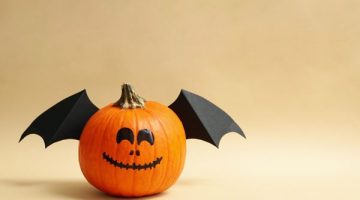 Roger: I can’t believe it’s finally Halloween! Hey, wanna do something fun?
Mary: No, Roger. I just want to go trick or treating.
Roger: Oh c’mon! That stuff’s for kids. Let’s go pay a visit to my neighbor. He never hands out candy! Last year, me and my friends TP’d and egged his whole house… We should do it again! And it just so happens I’ve got some toilet paper and eggs with me. What do you say? I think we should teach him a lesson!
Mary: I don’t know, Roger… That man’s really creepy. He never comes out during the day. He hardly ever talks to anybody… There’s gotta be something wrong with him.
Roger: Oh, c’mon! It’s Halloween! Let’s have some fun! Look, his house is just over there… It looks like there’s a light on, so he must be home. Hey, look… this year he’s decorated his yard! And pretty well, too. Look at all of that!
Mary: Yeah, this is kinda spooky, actually. Oh my gosh! Look at that coffin! It looks so real…
Roger: Do you want to go open it and see what’s inside?
Mary: No, no way! I want to leave.
Roger: Little Mary is too sca-ared. Ah, ah. Fine, I’ll open it!
Neighbor: Boo!
Roger: Ahhhh! It’s a vampire!!!!
Mary: Ahhhh!
Neighbor: Kids! All year preparing for this moment. Ah, ah. Maybe next year I should be a mummy…