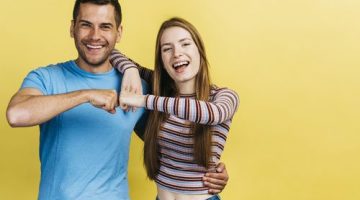 Have (your) ups and downs

Talk behind someone's back

Max and I started talking only because we were lab partners in chemistry class. Nobody could imagine we’d become friends. We were like chalk and cheese. Max liked movies, I liked reading. He liked going out, I was shy and preferred to stay at home. However, we began spending more and more time together and became good friends. We had our ups and downs, sometimes we would have small fights but in the end we would always make up. On the last day of school, however, I heard him talking to a friend and saying ‘Don’t tell Tracy’. I couldn’t believe it! I thought we were best friends! I immediately confronted him and we had a huge falling-out. I accused him of talking behind my back but he kept denying it. We didn’t speak for weeks. Well, until I received a letter. Yep, an actual letter. It was from him. I opened it and it read ’Tracy, will you go on a date with me?’. So that’s what the big secret was! From that moment on we’ve been much more than just good friends.